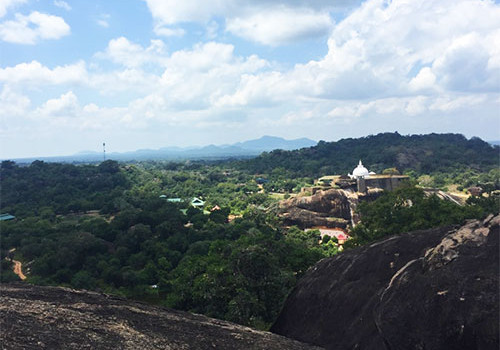 We rented a motor bike in Tangalle (1.000 Rp / $5 per day!) to go on a small tour around central and eastern Sri Lanka. Our main targets were the village of Arugam Bay and Yala National Park. The east coast is off-season in february but we were curious to see how it looked and slightly because it was off-season. Yala National Park was also at the top of my list of places to visit in Sri Lanka since it was the home of a lot of exciting animals, especially leopards and sloth bears.

J had found out about a pilgrim village called Situlpawwa that was situated inside Yala National Park but was accessible without actually needing to enter the park itself. Apparently, one could see plenty of the animals in the park free and all by ourselves, without having to compete with other tourists or pay for a jeep safari.

We drove away early in the morning on a motor bike that looked quite shady but seemed operational, despite having rather bad brakes. We realized this a little bit too late and I did not feel to comfortable driving a motor bike with bad brakes in a traffic that could best be described in one word: Chaos.

The motor was working fine and it brought us passed Kataragama, just outside Yala National Park and we continued towards the park. I was expecting a rather obvious road leading to some sort of gates and fence (as it looks in South Africa, where I have been on a few safaris) but it turned out to be more of a continuous change towards worse and worse roads until we finally started seeing elephant droppings on the road – we were in.

It was very difficult to drive our city motor bike on the extremely bumpy road. At one time I was heading towards a large hole in the road and hit both brakes. Since only the front brake was properly working it caught on and threw us in the gravel. We basically fell from standing still but I still managed to get some good scratches. Fortunately J was better off (she landed on me) and the worn motor bike was in no worse shape than before. 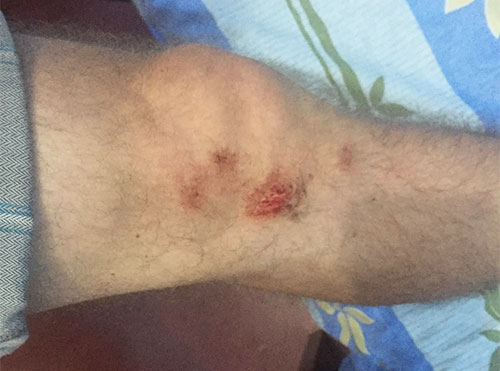 It was meant to happen sooner or later. Fortunately the accident did not lead to anything worse than this.

After a while we started to see wild pigs on the road and did not really know how to act. I have great respect for wild animals from my previous safari trips and I was expecting them to walk away when we approached, which they did not. I remember reading that wild pigs (wild boars) could be very aggressive, which turned out to be a myth, so I was very careful – especially when we drove past a family with a dozen of super cute piglets! 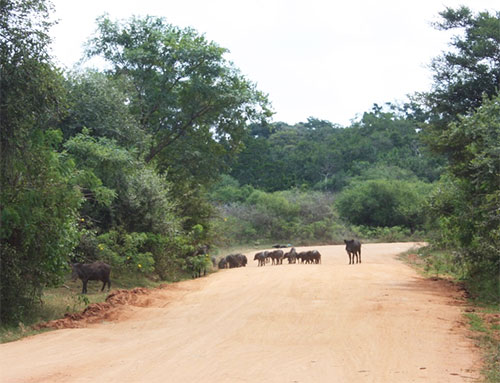 Wild pig piglets on the incredibly bumpy ride in towards Yala National Park.

The potholed gravel road was far from optimal for our city motor bike and we could barely driver faster than walking tempo. In addition the road was turning every 50 meters rendering our visibility to be very short. My initial enthusiasm of seeing elephants instead started to turn into a discomfort. I did not feel comfortable that almost every safari jeep we passed reminded us to be extra careful.

If we would bump into an elephant we would do it within some 50 meters and we would likely be within a distance where it would register us. We would have our motor bike pointing in the direction of the elephant (and not in a potential escape direction) and our escape speed would not be much faster than walking speed.

We bounced our way through the 4-5 km to the real entrance of the park, without problems. Unfortunately we still had 4 km left for Situlpawwa and I really did not feel like continuing the same way. So, we left our motor bike at the entrance of the park and hitch-hiked the last part with a bunch of pilgrims on their way to the temples.

I am not going to try to explain what Situlpawwa is because I do not really know. As far as I understand it is a gathering of temples and holy sites that buddhist pilgrims come to visit. We joined the family we hitch-hiked with around the park. We felt quite lost but they showed us with hand signals and a handful of English words when to wash our hands, put a flower on a wall, remove our shoes and so on.

The view over Yala from the hills of Situlpawwa was amazing and that alone was worth the trip out here. It was not, however, a good site to see animals as we thought. Apparantly, it was on our way out here where one was supposed to be able to spot wild animals.

When we finished the walk the family was continuing south so we were without a transportation back to our motor bike. There were a handful of other cars so our plan was to hitch-hike with some of those. A jeep from the national park tried to take advantage of our situation by offering us a “lift” for the insane price of 1.500 Rp (“but you have no other vehicle, how will you get back?”) which we resentfully refused. 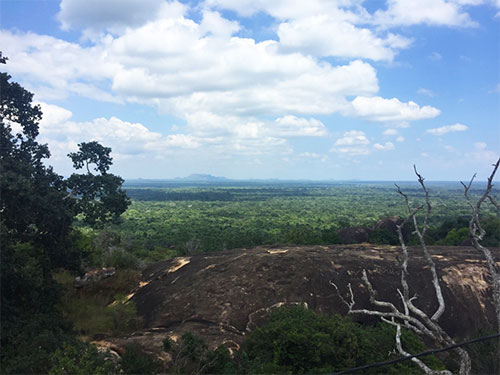 Yala National Park as seen from the hills of Situlpawwa

One pilgrim bus after another left and none could offer us a ride, either since they were crammed or because they were going in another direction. Finally there were hardly any cars left and the situation started to feel unpleasant as we waited, sweating and hungry. The alternative to walk the 4 km back to our motor bike, through the park, was heavily adviced against by a couple of soldiers that were trying to help us out, due to the elephants. 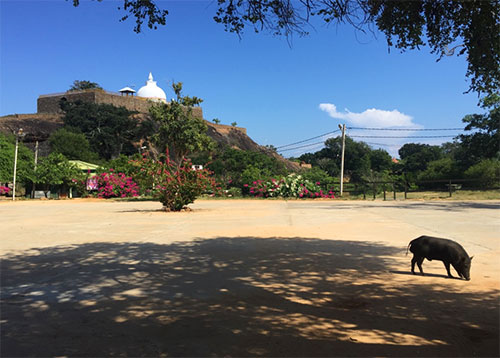 A (harmless) wild pig on the parking lot outside Situlpawwa.

Finally, we got the advice to talk to the store owner by Situlpawwa who had the last (?) car at the temple site and he reluctantly drove us back to our motor bike. From there we drove, still without seeing any elephants, the bumpy road back to Kataragam for a late lunch.

My recommendation: Situlpawwa is definitely worth a visit. The views from the temples are absolutely amazing. The ride there is a bit of a safari as well but, by all means, do not go here on a city motor bike like we did!