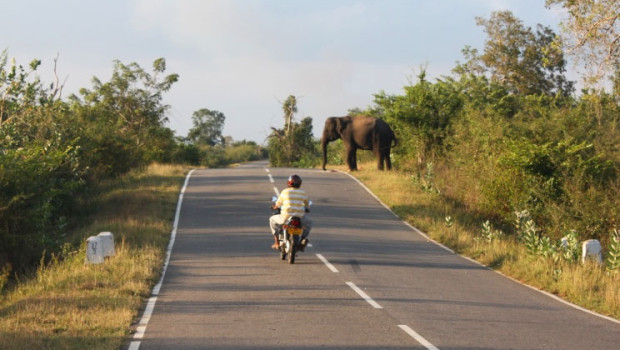 We had already had enough adventures for a day but we were not done yet. After our late lunch we continued north, through another national park (Lunugamvehera National Park). While driving on that road a few cars flashed us with their lights which we interpreted that we were having issues with badly calibrated head light. A couple of hundred meterr later we realized why they had flashed us – on the highway an elephant stood, partially blocking our way! 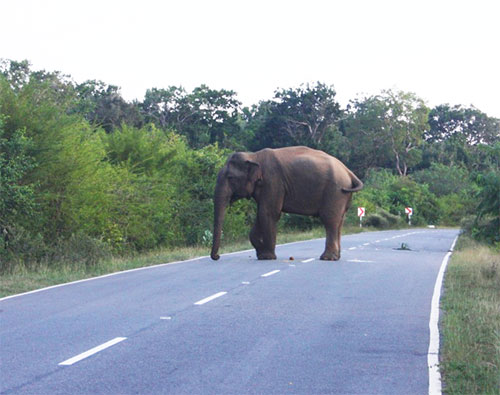 You shall not pass!

This was a completely different situation than when we had bumped our way through the pothole road earlier that day. We had good visibility and a perfect road to drive away quickly if needed, so we were both very excited! A few cars in front of us passed the elephant without it bothering too much. We were, however, on a motor bike and did not know how to handle the situation.

That’s when a glad and helpful Sri Lankan appeared next to us in a car. He told us to drive parallel to him and then speed past the elephant once we got near, which we did. It was an incredibly exciting feeling to pass a giant of an elephant, within 1-2 meters, while driving 50 km/h. If it would have just decided to take a few steps forward we would have run into a wall!

A video of where we pass one of the elephants with the help of Sarath.

The hospitality of Sri Lanka

We kept on together and further up by the road Sarath invited us for a cup of tea. At that time it had started to get dark and we were ready to find somewhere to stay for the night. When he heard about that he invited us to stay at his sister, who lived nearby, which we gladly accepted. 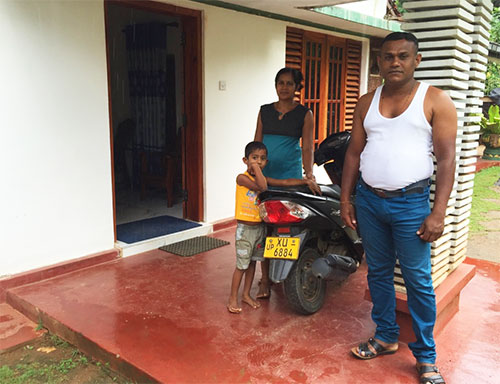 Sarath’s sister, with family, in whose home we slept the night. It seems to be a general “law” in Sri Lanka to smile all the time except in front of the camera 🙂 The family were really sweet and smiling all the time.

So, we get helped out by a young man on the road who first helps us pass the elephants and then invites us to his (well, his sister’s) house to spend the night. We were in awe of the hospitality! The people in Sri Lanka is in general very, very friendly and I am often surprised by their hospitality and joy but I wonder if Sarath was not something unique even in this friendly country. His sister hardly seemed surprised by the spontaneous guests and made dinner for us before we crashed into bed after a long and eventful day.

My recommendation: Driving pass the elephants on the B35 through Lunugamvehera National Park was an incredible adventure. If you are in the neighbourhood make sure you make this drive – and do it in the morning or late afternoon.