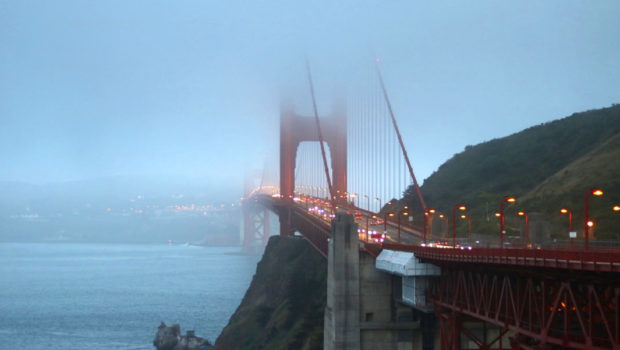 When Oskar told me about the seminar I was not really excited enough to book my flight ticket but when he mentioned that we could go to Napa afterwards I was all in. After the seminar ended that was exactly what we did as well.

I had recently seen the movie Sideways which obviously felt like a very suitable theme movie for this part of the trip. On my flight over to San Francisco I also saw Brokeback Mountain, which turned out to be quite relevant as well, but I will get back to that. 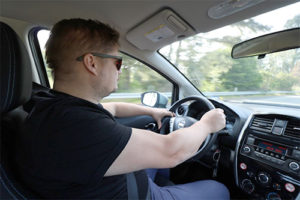 We rented a car in San Jose and drove down south to Santa Cruz on a detour to drive the picturesque Highway 1 up north. It was well worth the extra time. Highway 1 is the most western highway in the US and goes along the winding Pacific coast. The views from the highway are ranging from awesome to breath taking! We stopped frequently to take in the environment and some time after dark we took in at a Motel 6 along the way.

Our next day was wine tasting day so we continued inland towards Napa with the goal of going north to Santa Helena and Beringer vineyards. Beringer is a wine I have been drinking many times at our summer house so it felt really cool to actually see the vineyard that had fuelled so many summer nights. We went for the Reserved Wine Tasting which turned out to be an excellent choice! The wines were absolutely amazing and it was the 2nd best wine tasting I had ever done (after Rust en Vrede in South Africa). Wow! 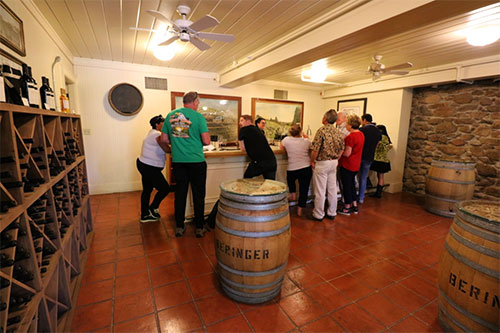 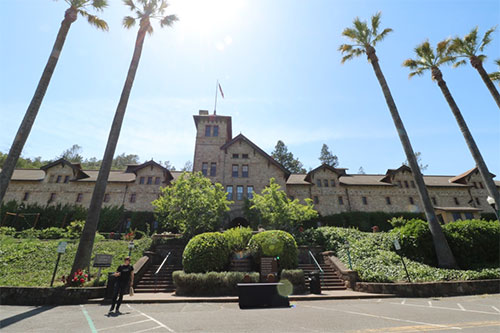 Culinary institute of America is an almost Harry Potter-esque building. 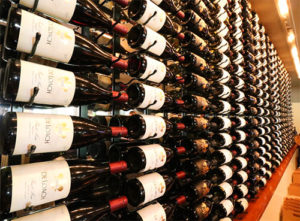 The wine made us too tipsy to drive somewhere else so we had lunch at the Culinary Institute of America next to Beringer vineyards and took an Uber down to Santa Helena for some coffee as well. After sobering up we continued to Hyatt in Santa Rosa where we had a booking for the night. We just had a quick stop leaving our bags before we continued to De Loach vineyards for a second wine tasting.

The wine was not nearly as good but we were now in “Pinot Noir”-country and I am more for the Cabernet Sauvignon which is grown around Santa Helena. We finished off the evening at Starck’s steakhouse in Santa Rosa, one of many recommendations we got from the very friendly sommelier at De Loach – an excellent recommendation! 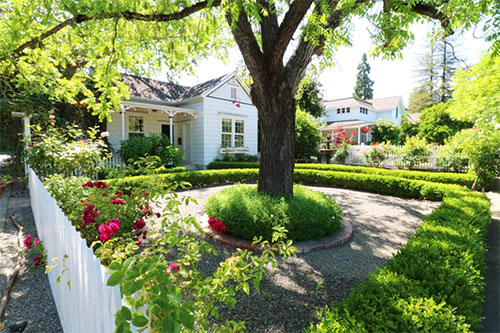 Santa Helena was our favorite wine country town – much prettier than Napa – with its cute BnB’s.

At this point we have had a very busy schedule ever since we landed in San Francisco. So, the next morning we took some time to digest the seminar we had been to, caught up on some work and, most importantly, had a looong breakfast with lots of good conversations. 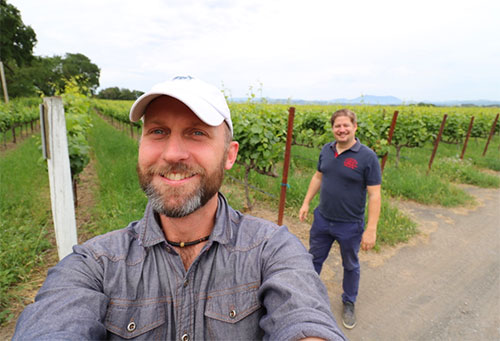 Me and Oskar at the vineyards.

We were set for an AirBnb in Guerneville the next night and Oskar had picked it completely out of location since it seemed to be in a very green area. After booking our room he read in the description that “it is a gay friendly community where one is allowed to walk around naked”. We did not really know what to expect!

We took another scenic route on our way to Guerneville and managed to squeeze in two more wine tastings: Moshin and Twomey. It was another Pinot Noir-tasting but still quite good. I can recommend Twomey especially, if not for anything else than the fact the view was quite beautiful. 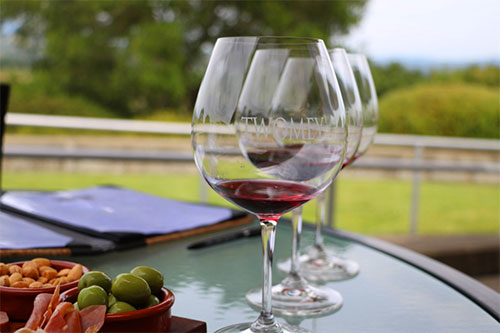 Arriving to Guerneville we bought two cheaper bottles of red wine (the wine at the wine tastings were usually from $40 and up!), a Subway sandwhich and started ascending the windy road up to Wildwood, the gay community and sanctuary where we were to stay that night. It was an amazing journey through a redwood forest where the view just kept on getting more and more beautiful.

Wildwood turned out to be one of the most beautiful places I have been to. Not only because of the absolutely STUNNING view but also because of its history. It had been a sanctuary for gay men, at first for a place to be yourself but during the AIDS-epidemic it was a very important place for the gay community to mourn but also a last place to enjoy before you die. It was tragically beautiful. 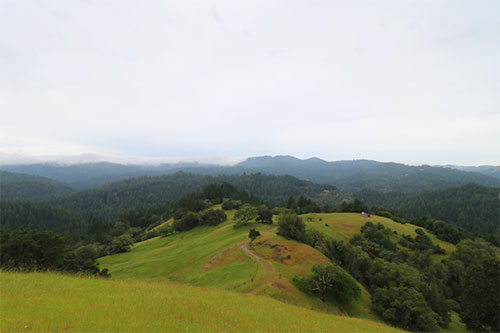 The view from the viewing point “Julie Andrews” was absolutely amazing. Especially with the clouds stretching in over the mountains.

Not being a part of the gay community myself, I can only imagine how important this place must have been during times of persecution and times of sorrow where almost all of your friends were dying. The feeling of love and friendship was almost tangible even though Wildwood was almost empty when we where there. 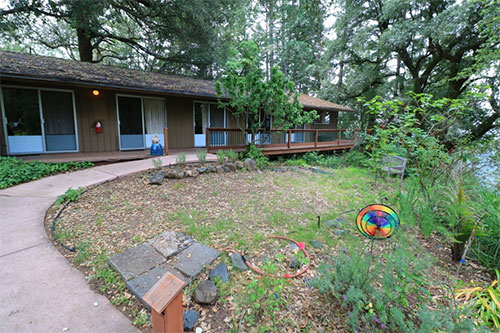 The cabins at Wildwood retreat center.

Me and Oskar brought our sandwiches and the bottle of wine down to a viewing point and it was simply incredible. The green mountains were stretching as far as our eyes could reach, there were green grass, redwood trees and wild deer all around us. Amazing! 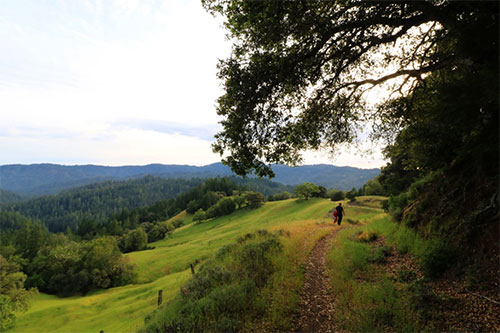 Surroundings around the Wildwood retreat. 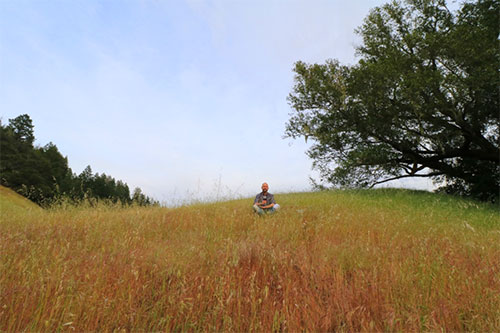 Sipping wine in the grass field. 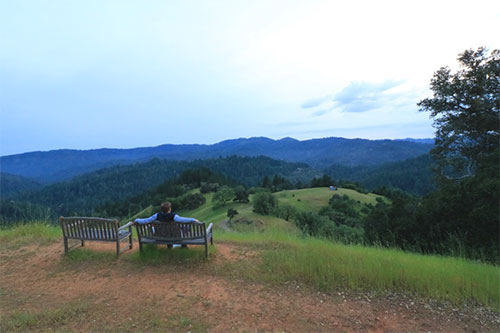 The morning after we continued down to San Francisco, mainly because we had to return our rental car. Neither of us felt like returning to a big city, even though San Francisco is quite a cool city. We took in at another AirBnb and finished the night with burritos and a pitcher of Margarita at a Mexican restaurant in the area.

Our last day happened to be my birthday but there was nothing else special about it. We had some breakfast in the area, took an Uber downtown in half an effort to experience San Francisco but left for the airport. I celebrated the evening of my birthday with a glass of Caubernet Sauvignon, catching up on some work while looking at a distant approaching storm.

Oh, regarding storms, you are going to read a lot more about that in the weeks to come!

Storm chasing in the USA