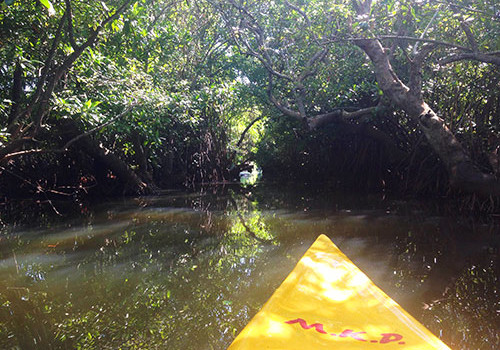 We continued our beach odyssey with a bus towards Tangalle, a beach resort at the very middle part of the south coast of Sri Lanka. It turned out to be a jackpot. Tangalle was not more swim friendly than other beaches, not really prettier than most either but the feeling of it was something completely different. Tangalle is a rather sleepy and not very well visited beach resort and, in addition, there was a lot of sea breeze in the afternoon but this was all in our taste. There were hardly any tourists around, no barkers and very few tuk tuk-drivers. The strong sea breeze made the 30 degree heat durable as well. This was exactly my kind of beach! 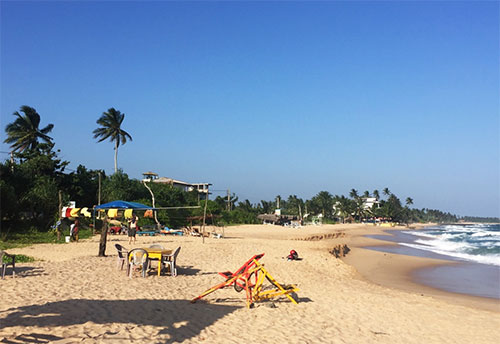 There were hardly enough people on the beach to gather a beach volleyball team so a villager uses the opportunity to dry his laundry in the volleyball net.

It was nice and cool in our room as well that we, well J of course, got to a record low price (1.000 Rp / $5 per night at Viraj Garden). The first thing we did after checking in was to go down to the beach and try to find a restaurant. We walked a few hundred meters and stopped by a place, simply because they had hammocks, and ordered a Rice and Curry. It turned out to be another jackpot. The Rice and Curry at the restaurant “Pearl Beach” was incredible and the restaurant quickly became our favourite restaurant. We finished off the day by catching up on some work and research our next targets – Yala National Park and Arugam bay. 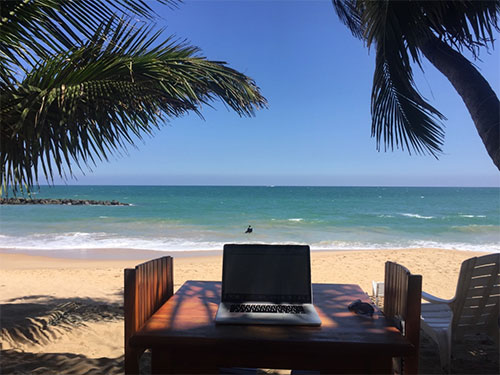 I needed to catch up on some work and could not have found a better view for my office of the day.

There was not all that much to do in this rather deserted beach but the day after we rented a kayay to explore the lagoon that was within walking distance from the beach. The lagoon in Tangalle is sort of a mangrove swamp that is a home to several types of birds but also water monitors and monkeys. It was a really nice kayak tour and quite powerful to see water monitors, some as larges as small crocodiles, resting on the shores or swimming in the water. 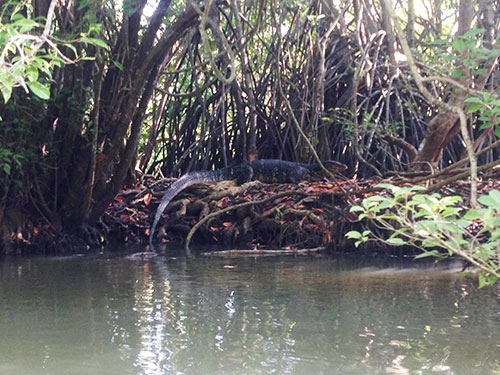 This water monitor was approximately 2 meters long. When we paddled by it slowly got up and walked away, siightly bothered.

That afternoon I had to catch up on some more work so I went to a print shop to print sand scan some contracts. I had a rather big deal that was about to close and it was quite bizarre sitting on a small plastic stool and signing the deal! The owner was very nice and gave me an advice: “You should come to my village, we have turtles coming to shore every night at 22.00”. Since both me and J love animals it seemed like the perfect thing to do that evening.

I interpreted that as a place where we could go, have some dinner and then walk out on the beach to watch the turtles. Instead, it turned out to be a national park without a restaurant in sight (and we were both extremely hungry). In addition it cost 1.000 Rp to go down on the beach. We still did not really know what to expect so we thought for a few minutes before agreeing – and we were very well awarded for it.

It was not just a matter of turtles coming ashore. In the strong light of the full moon there were sea turtles coming ashore on the steep beach to lay eggs, and we were there to witness it! We were on the beach with a big crowd of other tourists as well as a few strict park guides. The group was divided in fours and each group could take turns in witnessing how the 2.50 meter sea turtle first dug a hole in the sand and then dropped slimy, ping pong-shaped eggs into the hole. Unfortunately, the light was not good enough for me to take any good photos of it.

When the turtle was finished it started swiping sand over the hole to cover the eggs from predators. In addition, we also got to see another sea turtle trying (and failing) to come ashore in the strong waves – all lit up by the strong full moon light. It was a magical night that we finally got to end by having a Kottu and a Rotti to eat at a restaurant that fortunately was still open.

My recommendation: Tangalle is a fantastic beach resort if you want to get away from the boring tourist resorts and not see a beach restaurant every 20 meters.

If you go to Tangalle make sure you do not miss out on the restaurant Pearl Beach and try out Kamal’s Rice and Curry. Be prepared to wait for your food though (1 h).

You should, of course, not miss out on the sea turtles laying eggs in the night near the village of Rekaja some 20 minutes away.

Whale watching and and a secret beach in Mirissa