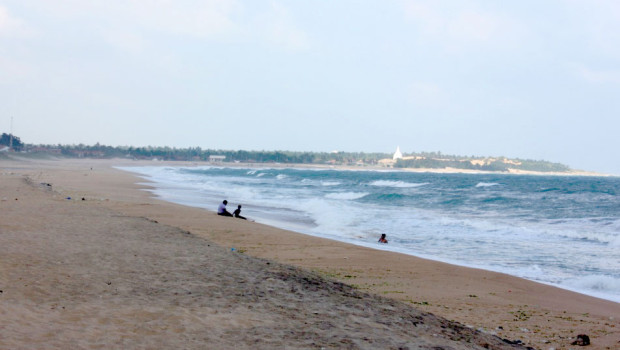 We woke rather early and had a sturdy breakfast before we said goodbye to the friendly famil and continued east towards Arugam Bay. Sarath recommended another national park, Lahugala, that we would drive through and where we possibly could see elephants so we were excited about getting away in time. 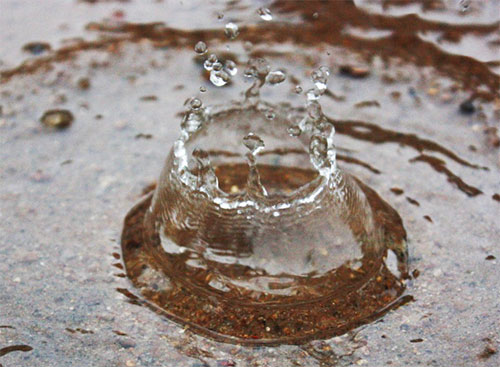 It rains frequently all the way to Arugam Bay which makes it difficult, and slow, to drive. We need to stop and take breaks all the time – during one of those breaks I try to take the perfect rain drop photo.

While driving through the park we do not see any elephants but we see many water buffalos, which is really cool (even though they kind of look like ordinary cows). In Africa they are counted as one of “The Big 5” together with, among else, elephants. That means that water buffalos are one of the top 5 most dificult animals to hunt. The reason is that if you miss your shot at it it will hunt…you…down… So, even if they look like gentle cows they are quite brutal which makes it a bit exciting while driving through the park. 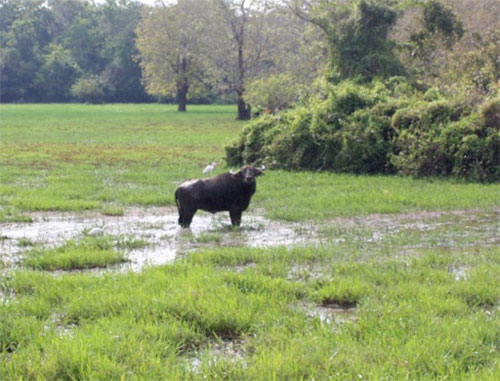 No, water buffalos do not look particularly dangerous.

We arrive at Arugam Bay in the afternoon and check in at the guest house Beach Hut. Arugam Bay is, during peak season, a popular beach resort (and surfing resort) but now in February it is very quiet and the majority of the stores are closed and the hotels and guest houses seem half empty. It feels like Beach Hut is really the only place that has some people! The beach (top photo) was nice but there was overcast and windy so we never really consider taking a swim.

Getting ahold of a safari jeep in Sri Lanka

When you go on jeep safaris in Yala National Park (Kumana) Arugam Bay is the place to start but there is a slight problem with this. Jeep safaris in Sri Lanka is not about booking a seat in a jeep but rather renting an entire jeep, with driver, and then it is up to you to find more participants to share the jeep with.

The result is a lot of time-consuming extra work for you and many, thus, choose to just take the cost and go in a half empty jeep. This, in turn, results in far too many jeeps in the parks, especially in the southwest part of Yala. As far as I know there is no way of arranging a full jeep beforehand so you are left with the option to walk around the guest houses and hotels and ask around, which is what I did.

About an hour before sunset we went out on a “highway safari” again by driving down the same highway, back and forth, as we just came from in hope of seeing elephants of perhaps even a leopard. Unfortunately we do not see anything else than water buffalos again so we went back home. On our way back out we happened to see one of the most exciting things on the entire trip!

Farmers on the field with flashlights

It had gotten dark during our last half an hour on our way back. I had just caught my 411th moquito in my mouth (severely annoying and a reason for not driving in the dark!) when we saw some men on the fields next to the highway lighting up the fields with strong flashlights while shouting. My spontaneous reaction was that they were out looking for runaway cows. When we heard a large boom I jokingly said it was an “elephant bomb” (used to scare away elephants). That there would be elephants on the fields felt very inprobable since we were far away from the national park (at least I thought).

After a while we see how the light beams land on something grey that looks like large rocks in the dark: Elephants! It is a small herd with some 7-8 elephants as far as we can see in the dark. We obviously stop to see what is going on.

We start to talk with one of the farmers who explains that the elephants come every night from the national park in the north to eat their crops, south of the highway. Thus, they have to gather a gang of nightly guardians from the village every night. Every night! These guardians use torches, shouting and fire crackers as their only means to keep the elephants in the park and away from their livelyhood. It is a fight, Men vs Elephants, every night and a unique and incredible drama for us to watch. 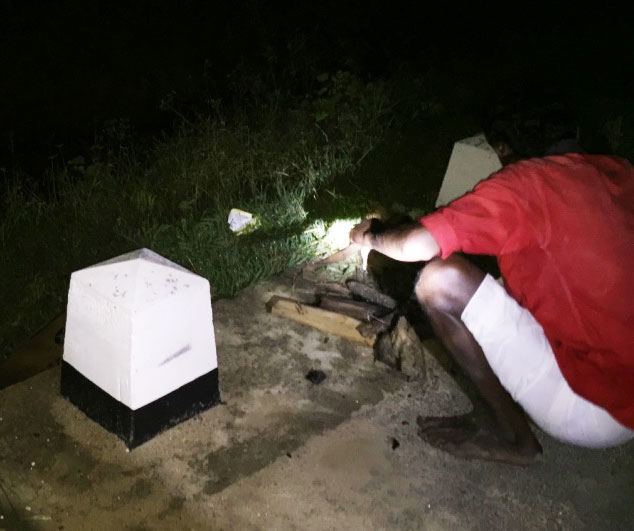 This is unfortunately the best photo I have from the night since it was pitch black and my camera is not all that good.

After a while the hospitable farmers invite us to come along on the field to have a closer look. My risk analysis tells me this is a really bad idea but, at the same time, the farmers are doing it so we cannot be less brave. We never really go close but it is a really awesome feeling to go through a path in the rice paddy in the middle of the night, with firecrackers booming, people shouting knowing there is an elephant herd further up that you can barely see. Wow!

When we are back at our guest house I continue my attempts to gather people for a safari jeep for the day after. After many ifs and buts I finally manage to fill up a jeep. The price I have got from my contact is 7.000 Rp which means a meager 1.150 Rp ($6) per person. At this time I am incredible tired after a long and demanding day so we both crash into bed.

My recommendation: Driving through Lahugala national park is an easy way to spot animals on your own. Make sure you pass it during dusk or dawn where you are most likely to see animals – but be careful!

Considering the fight between elephants and farmers is ongoing there is a certain chance you may actually be able to experience it yourself. Go some 1-2 km east of Arugam Bay (towards Lahugala) and keep your eyes open for the peasants. The same advice is viable here – be careful! – if you encounter elephants on the road in the dark you may find yourself in trouble.

Arugam Bay off-season is a bit boring and the weather could be very dull. As a port for Yala National Park it is not a bad stop though.