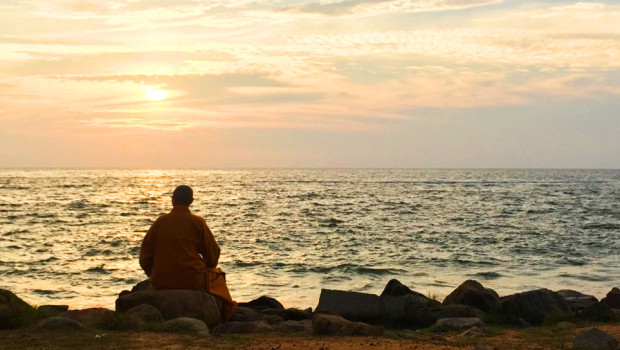 After all the setbacks the last week I was starting to really look forward to go back home. Our final stop on the trip was to go back to Colombo. It turned out to be more exciting that it needed to. We were late to the train and never had time to buy tickets so we just had to hop on the train when it came. During the entire (crowded) train ride we discussed how to get pass the ticket collectors at the Colombo train station.

We finally decided to go to the ticket office and act like stupid tourists and as if we were actually leaving (as opposed to arriving) and looking for a place to buy tickets. This was the exact same thing we did when we came to Colombo a month earlier, only that time we did not act. The ticket guy let us out, we stood in the ticket line for a minute and then left – thus jumping a ticket that cost 60 Rp (30 cents). There were no other options really, since we could not buy a ticket and had to be on that train!

After a stop at the consulate we checked into a decent room with a sea view and went shopping since all of J’s clothes were gone. 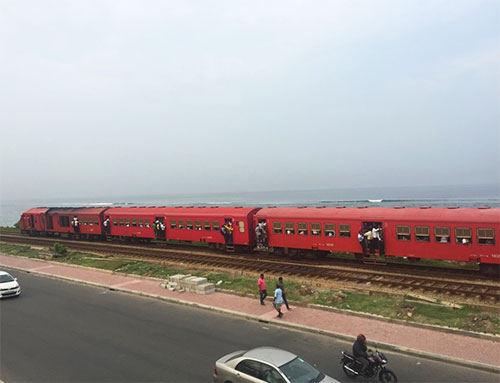 The trains coming into Colombo are super crowded. Another thing that blew my mind was how long the waves are that comes crashing into Colombo (look behind the train). They stretch for kilometers!

One of the things we were looking forward to by coming to Colombo was to explore the good supply of vegetarian restaurants. We tried another Indian “bucket food” place that we tried in Nuwara Eliya and it was equally good. In the evening we tried Shanmugas (another Indian restaurant) and it was excellent as well. Close to Shanmugas, just by the ocean, is a small bar with hammocks and swings (!) that is perfect for a sunset beer and cashew nuts. Do not miss it if you go for a dinner at Shanmugas!

In the morning J had to get back to the consulate again so I went for a luxury breakfast buffet at the popular Mount Lavinia hotel. I love breakfast buffets and especially when they have such a variety as this one. There were everything from egg hoppers, waffles and pancakes to fish curries to bread, müsli, pastries and fresh fruit. To my great joy they even had fresh king coconut water. Yummy! 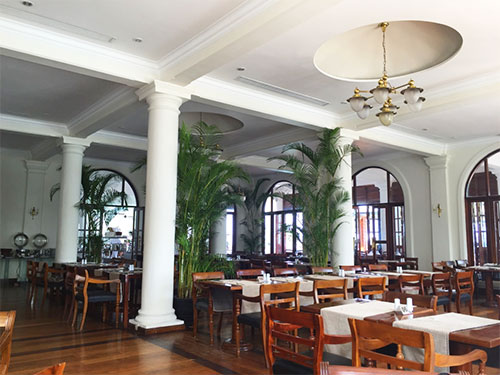 The dining area at Mount Lavinia.

The breakfast in itself was great and the setting was amazing in this old colonial style hotel. It is pricy though, 1.400 Rp, but still well worth it. If not for anything else just to have a reason to visit the hotel. J joined up later on and slept in a sun bed while I was working and sipping on an amazing ginger lime crush-drink.

In the evening we met up with my brother in law who happened to be in town for business. It was a huge difference in comparison to how we had lived the last month. He stayed in one of the most expensive hotels in the city where we met up with him for a drink with him and his colleagues. Then we continued on to another luxurious hotel for a drink and then further on to a five star restaurant with excellent wine and so on. It was amazing, and very different!

Our flight back home was that same night but at 4.30 a.m. and we struggled to stay awake until we finally could board and just crashed (not literally). Our 30 days in Sri Lanka was over.