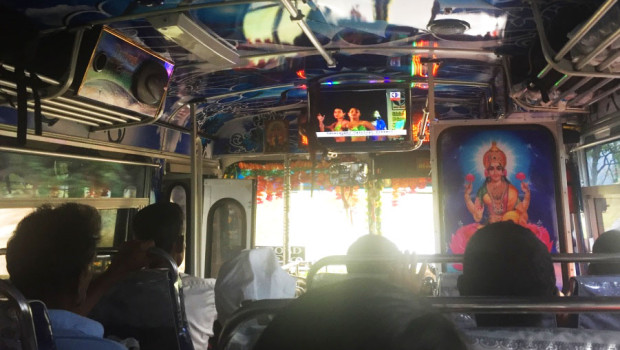 I felt like we have had a few days of bad luck here in Sri Lanka. We really couldn’t find that One Spot to settle down in and just relax our last days in Sri Lanka. I had more or less given up my hopes on finding a beach like Tangalle and was at least hoping to do a couple of scuba dives in the Colombo area during our last days.

Negombo, where we stayed one night again, had a few dive centers but we could not get ahold of any and the dive sites did not seem to exciting. Colombo supposedly had several great wreck dive sites but it turned out there was only one (1!) dive center in Colombo (Island Scuba) and it was fully booked. Not that it mattered much, all the dive sites in Colombo was for advanced divers – and not for Open Water divers like me. I was not happy…it felt stupid we had left Kalpitiya without diving.

J suggested we should go to Bentota. I was not too excited about that either to be honest. The reviews on Trip Advisor said it was a beach full of garbage, with only charter hotels and no restaurants outside of the charter hotels. I did not have any better suggestions so we got on the bus. Again.

Going through Colombo by bus is not a good idea. The traffic is horrible so it is incredibly slow. In addition, if the bus is not driving fast enough you get no ventilation so it is very hot as well. The trip from Negombo down to Bentota that would take 2 hours according to Google Maps (not like we really trusted that, but still) took 5 hours instead! If you ever plan to go through Colombo, take the train!

The worst was yet to come though. When we reached Bentota and I got up to the front of the bus to get our bags – J’s backpack was missing! We had left them at the luggage stand in front of the bus like always (which is the only real option in those crowded buses) but in the crowded bus someone must have left the bus and just snatched it. The driver, who sits next to them and is supposed to keep an eye on the luggage, had not seen anything – nor had the conductor.

We stopped the bus and obviously looked around everywhere despite knowing the search was in vain. The bag was gone and the conductor and driver did not seem to care all that much. They were more like “Meh, who cares? We need to continue our bus ride now”.

We could not really do anything else than to get off and walk back to Bentota. After quickly getting a room, J made all the necessary calls to block credit cards etc before we headed to the police station. Despite being a tragic event the evening at the police station had its humorous moments, especially when the police man with a limited vocabulary in English started speaking Singalese when he could not make himself understood in English.

What are the lessons learned?

We talked a lot about what we could have done differently. Should we have put our bags in the trunk of the bus? Well, then we would have had no view whatsoever over our bags. We did that during one trip and I felt nervous about it the entire trip. We could not have held our big backpacks in our laps the entire trip either, not when it was as crowded as it was. Could we perhaps have tried to switch seats to some in front of the bus to have a better look? Not really, as crowded as it was that would been a logistic nightmare. 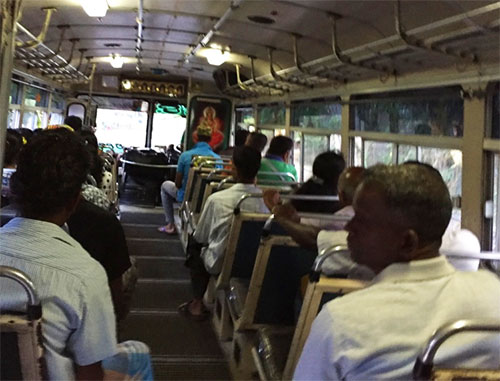 When it is not too crowded it is easy to keep track of your bags (as seen in the front here).

The only real option is to keep the backpacks in the front, where they are supposed to be, keep as few valuables as possible in them and try to stay as close to them as possible in the bus. That is, however, what we did every time we took the bus. I guess you are just playing the odds when you travel by bus in Sri Lanka with luggage.

Although much of the days in Bentota circled around the stolen bag we actually managed to relax a bit in Bentota as well. It turned out that Bentota was far better than the reviews on TripAdvisor had suggested. The beach was one of the prettiest in Sri Lanka and the resorts were nowhere near as intrusive in the beach view as I would have expected. There was also a decent supply of restaurants although many of them was by the road, and not by the beach.

We rounded off our last beach night as it was supposed to: with a Piña Colada by the beach. The best one ever.

My recommendation: Stay as close to the front of the bus (and your luggage) as possible, especially when it is crowded.

Make a stop in Bentota and enjoy the nice beach. This would probably be my go to-beach if I would land in Sri Lanka in the morning, heading south, and want to get to a nice beach quickly.