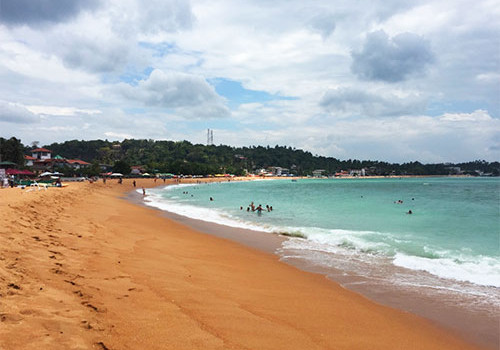 After we woke up and had breakfast we continued with an afternoon trip towards Galle. Parts of the city of Galle is a fort, surrounded by walls. I would say Galle is a nice day tour and perfect for a walk among the alleys with its stores and coffee shops. The fort has some 80% tourists so it feels a bit like any other tourist location in the world, like the Old Town of Stockholm – beautiful but very touristy.

Small alleys and streets to lose yourself in in Galle, Sri Lanka. 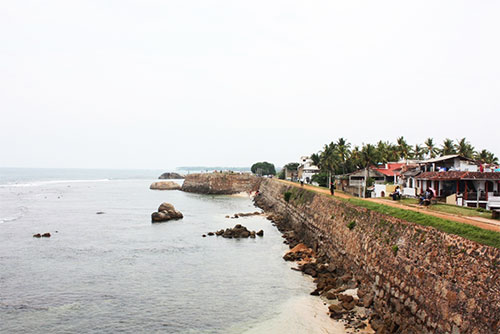 After Galle we took a tuk-tuk east to spend our next day in Unawatuna. When the tuk-tuk driver started acting as a sightseeing guide (i.e. pointing out some more or less interesting lands marks on the way) my backpacker sense started tingling. Spontaneous sightseeing like this is a classic among taxi drivers and tuk-tuk drivers I have met in order to provide value, and thus, a higher price.

Of course, when we arrived, the driver demanded more than agree upon with a made up story that we had gone further than he anticipated. Altogether, it was a discussion of $1 but it was more a feeling of getting tricked that made it difficult to give up the discussion. In the end he got a bit more than agreed upon.

Unawatuna has, as opposed to Hikkaduwa, no big road close to the beach on which you need to dodge buses and tuk-tuks to get to the beach (if you live on the cheap side of it). In Unawatuna there is instead a small, jerky road lined by a bunch of tourist related stores, restaurants and hotels. My feeling was that even thought there was a lot of tourists around, it never really felt as touristy a Hikkaduwa. Maybe it has to do with the restaurants being a bit cozier and a more unique than the usual beach restaurants in Hikkaduwa. For the first time on this trip we found a really good WiFi so we kept on to it and claimed the spot with our lap tops. 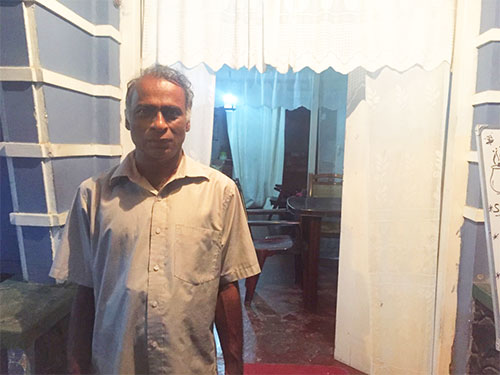 The owner of a fantastic, small, vegetarian restaurant called Sri Dhara. Do not get fooled by his grumpy look in this photo, he was happier than most!

At this point we had started to get a bit tired of the poor supply of vegetarian, or even Singalese, meals on the restaurants. The food at the tourist restaurants is often a bit dull and very often a copy of the food in the restaurant nextdoors. So we were really happy to find the vegetarian restaurant of Sri Dhara. They only had one meal on the menu, Rice and Curry, but this one meal was made with a big heart by the proud owner – and it was the best meal we have had since we got to Sri Lanka! 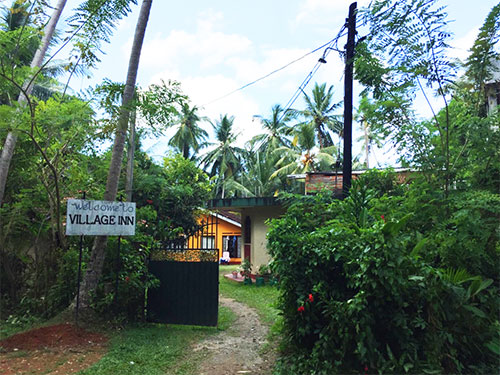 Slightly obscured we found Village Inn. At least it was cheap (1.300 Rp / night).

I had slept bad for several days in a combination of night time heat and fairly shitty beds. We usually stay at the cheapest possible places and that means fans of varying quiality, hard mattresses and pillows like bricks at times. The morning after our night at Village Inn, a decent and cheap place, I woke up with my back full of red, itchy bites on my lower left back. Bed bugs? I do not know. It was not all that bad but it feelt icky. I found no bed bugs in the bed so it is reasonable that I was bit from lying down in one of the beach couches I had been in. 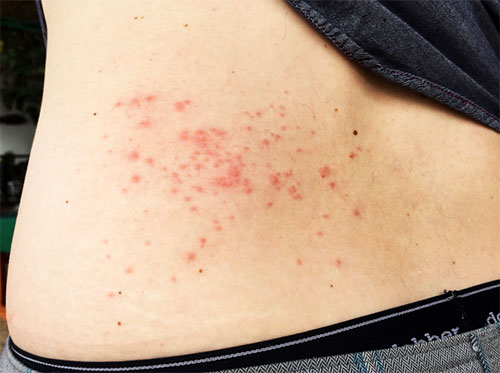 Bed bugs? I do not know and I am not really sure from where I got them either. It looks far worse than it was: just a bit itchy.

My recommendation: I liked Unawatuna better than Hikkaduwa, especially since it was not as much of a standard tourist beach resort. The lack of a noisy, life threatening road made it much more pleasant as well. The beach in Unawatuna was nice (see the top photo) but not as nice as in Hikkaduwa.

If you are considering either beach my recommendation would be: If you want a good supply of restaurants and is willing to pay a bit more for a beach side hotel (so you do not have to cross the road) – otherwise, go with Unawatuna.

Edit: After seeing some more beaches in the south of Sri Lanka, I would not recommend either place really. Further east there are several, much nicer, beach villages.