The traffic in Sri Lanka 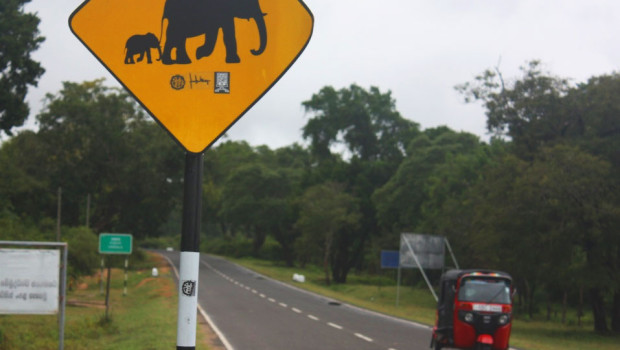 After three days on a motor bike, a few rides with tuk-tuks and some bus rides I thought I would write a bit about how it is to travel on the roads of Sri Lanka. Before the trip I had read quite a bit about how chaotic the traffic was and it was mostly true. I have seen worse (India) but the traffic in Sri Lanka was not far behind.

First of all, in Sri Lanka you drive on the left side of the road but this is not really a problem, even if you are not used to it. If you are outside of the cities there is usually just one road and one lane to keep track of. When you are in your left lane it is no problem to just stay there. So, do not worry too much about that.

Buses and other large vehicles

The most important rule on the Sri Lankan roads: Big Vehicles Decide. If a bus wants to overtake in the opposite lane it is up to you to move out to the edge of your lane or simply smash into the grill of aforementioned bus! The buses drive like crazy on the roads: overtake in hidden turns, when there is clearly oncoming traffic (letting them break) and constantly honk their oversized horns to make you move.

Passes is thus not only done when there is an empty lane to pass in. It is very common that you see three parallel vehicles at an overtake. Sometimes I saw vehicles overtaking another car that was, in turn, overtaking a vehicle! As a motor bike driver you need to stay alert at all times and constantly be prepared to brake and/or head towards the edge of the road. It is up to you to solve the problem, not the bus, if you want to stay alive.

The highways are, in general, quite ok and in many cases really good as well. It is very rare to see pot holes in the asphalt but sometimes there could be fixes in the asphalt that are very well made and they can be scary to drive on since they makes your motor bike lose balance a bit.

The shoulder of the highways are slippery, full of things to collide with and the edge to get back on the road could be several centimeters tall. It is, in other words, not recommended to get forced out on the shoulder of the road, even with a large, speeding bus coming at you.

Animals on the road

There is an insane amount of animals on the road and most of them are dogs. In areas around cities and villages you see a dog on, or just by, the road every 100 meters. The usually move very slowly and never run after your motor bike or do anything unexpected. In other words, if you make sure you do not drive over them there is not really a problem but they are an obstacle you need to be careful about at all times. Also, do not expect them to jump out of the way for you. They will barely make an effort to move when you approach them at 60 km/h!

Outside of the dogs there are often cows by the roads and sometimes on the roads as well. I would not really call them a real problem though since they are easy to see and it is easy to predict their moves. 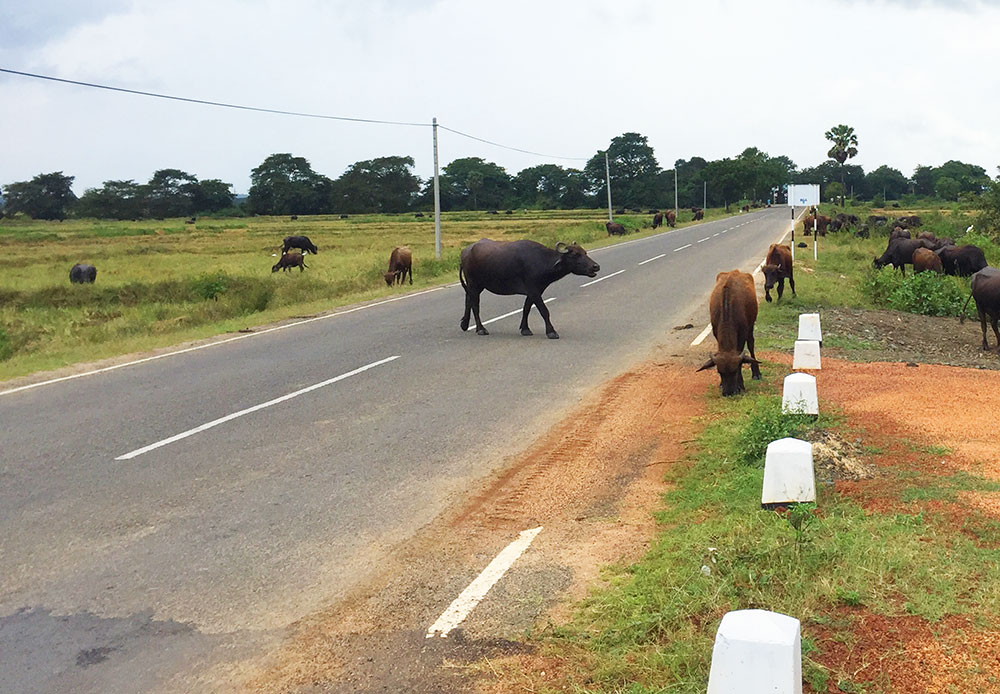 Cows are the most common animal to be found on the roads (or at least by the roads), after dogs. 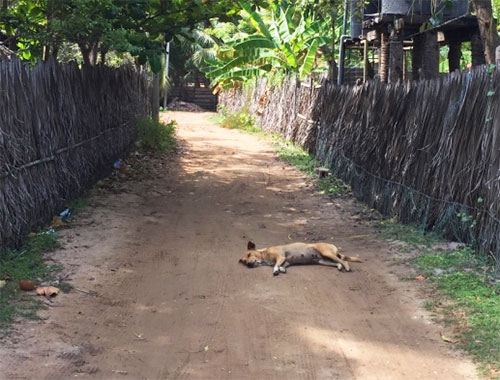 A very common sight. Dogs can sometimes be seen lying asleep in the middle of highways as well. 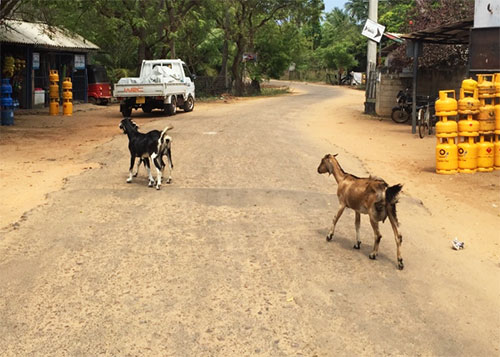 Goats are not that common but they do stroll the streets of Sri Lanka as well. 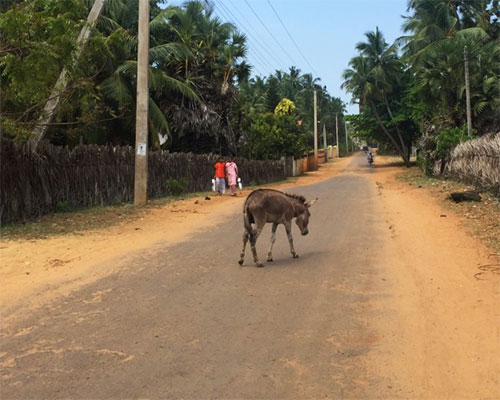 Donkeys are not the most common animal on the roads of Sri Lanka but you see them as well.

As I have written before there are also wild animals on the roads as well and most remarkably elephants. Those are special cases and requires special actions. Look at how other cars and motor bikes do, and do the same thing.

So, you could play the odds if you do not want to arrange with an international driver’s license or if you have forgotten about it. There are, however, a lot of traffic cops out on the roads and you see them stop drivers all the time. During my three days on the motor bike I believe I saw some 20-30 cops on the road. They do not seem to be targeting tourists for some easy money or otherwise we would probably have been stopped several times. More likely is that they target speeders and I was constantly driving under the speed limits, simply for our safety.

Outside of those crazy buses there is an even distribution of motor bikes, tuk-tuks and regular cars on the road. They usually drive nice and slow but can do unexpected turns and dangerously drive out in front of you, especially around the villages. A common problem is that motor bikes and tuk-tuks forget the blinkers on, which makes it difficult to know when it is safe to overtake.

In other words, there is a clutter of animals, speeding buses, slow trucks, and other traffic on the roads. You need to stay very alert when you drive – but the traffic is not completely chaotic. In India I have seen cars taking short cuts in roundabouts, overtaking on the shoulder of the road etc and the traffic in Sri Lanka is nowhere that bad. You rarely see speedsters (except for aforementioned buses) and many potential dangers are solved by both vehicles braking until they both drive slow enough to pass.

In short: Get an international driver’s license. Stay alert at all times.

Negombo – the beach “everyone” visits