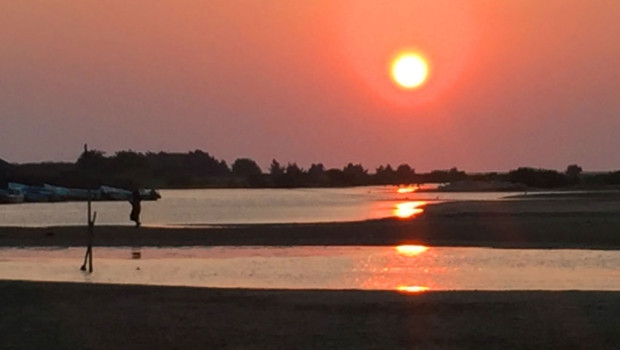 Ever since our days in Tangalle we have, at most, slept two nights at the same place – which is incredibly tiresome. Every day we have been sitting a few hours on a bus, had to spend some 30-60 minutes on finding a (cheap) guest house and, in addition, packed and packed up. The reason is that we have not really found the spot where we could feel: This is the place where we want to stay! in the same way we did in Tangalle.

We had heard a lot of good things about Kalpitiya in the northwest corner of Sri Lanka. Beautiful beaches, away from the tourist resorts and with good scuba diving. There is not so many other places around so we place all our bets on it and head up there, this time by train (phew). 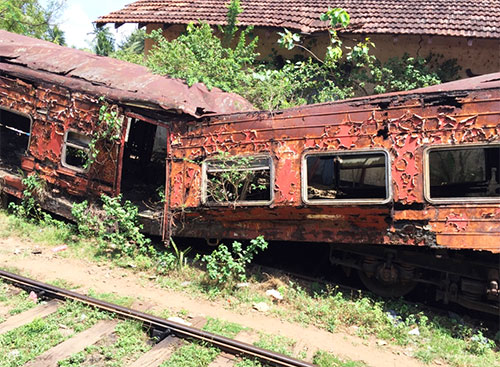 These old, worn out, trains can be seen by almost every station north of Colombo.

On the train we meet Ramika and his girlfriend (both from Sri Lanka) who are heading for the same destination, to visit the girlfriend’s parents. They invite us to come along on a trip around the peninsula with their family, as well as stay with them if we want to as well. The hospitality, once again!

This time we (mostly me) say No thanks since they live quite simple with no fan etc. I already have severe sleeping problems in the heat so we check in at the only low price guest house in the area instead. In fact we never really go to Kalpitiya but to a place a bit south of Kudawa on the same peninsula. 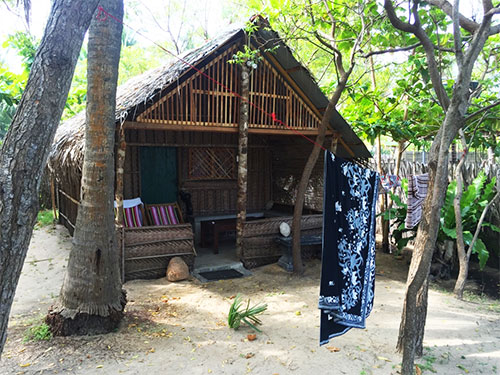 Our bungalow at the guest house Werala. One of very few low budget alternatives in the area.

It turns out that the peninsula is far more deserted than we expected, which is both good and bad news. It feels great to stay a bit off the beaten track and to relax a bit but the natural downside is that there is not too much to do. There are really just one or two guest houses (as far as we find) in the price range of 2.500 Rp on the west part of the peninsula and no real restaurants outside of the ones the guest houses have. Instead, we have lunch at the local Rotti-place. It is, as most of the times, really savoury but at this time I am getting quite tired of Kottu and Rotti. 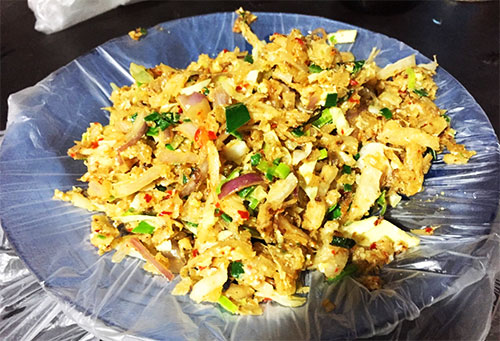 Kottu is a meal you see everywhere in Sri Lanka but, if I understood it correctly, it is really an Indian dish. The dish itself is bread (Rotti) chopped up with vegetables and fried.

Unfortunately our day trip with Ramika gets cancelled so we try to find a dive shop in the neighbourhood but the owner is away so we head up for Kudawa instead. I misjudge the sun and put on too little sun lotion and burn my arms completely 🙁 Kudawa does not really have more to offer than our own beach but it seems to be a paradise for kite surfers. The beach is vast and beautiful, like most Sri Lankan beaches. 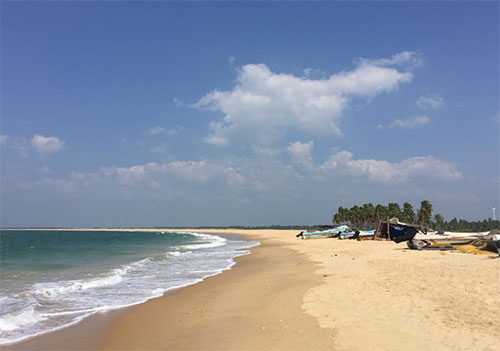 The mile wide beach of Kudawa. It is almost completely deserted except for a few fishermen, about 10-12 kite surfers and some crabs.

Later in the afternoon we get invited for a late lunch by Ramika to his girlfriend’s parents. They live in a very simple house which was given to them by the local church, Ramika explains. The man of the house is an unemployed fisherman and the woman is a house wife, and thus very poor. They still invite us for a fantastic Rice and Curry. I feel a bit ashamed for eating since it feels like I am taking the food from the kid’s bellies but they insist. We insist on paying our fair share but that is out of the question.

We finish the day by swimming in the sunset. As usual, I get hollered at by some local fisherment who needs help to turn over a boat that have capsized. It turns out to be be impossible, partially because the fishermen are really drunk! 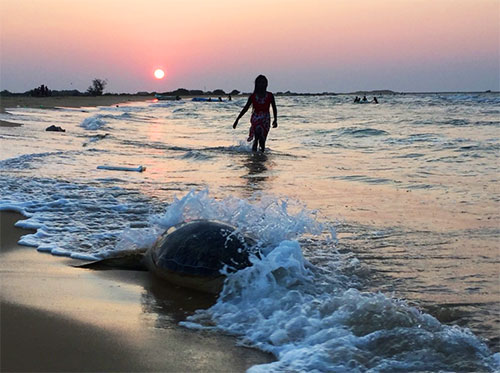 A girl is swimming in the sunset and in the front, a turtle. 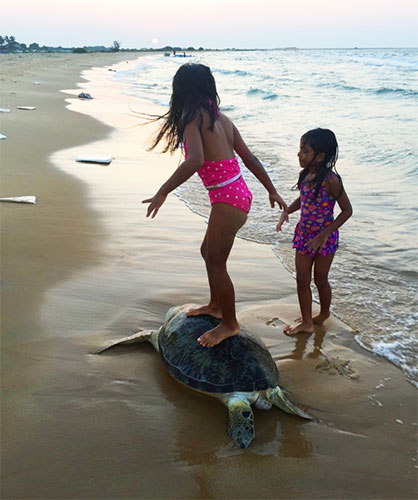 Surfing turtles is a common, but very slow, type of transport on the beaches of Sri Lanka. But “turtling” is also a transportation method that have faced immense resistance from animal protection groups in Sri Lanka. #TurtlingIsNotOk #EndTurtlingNow 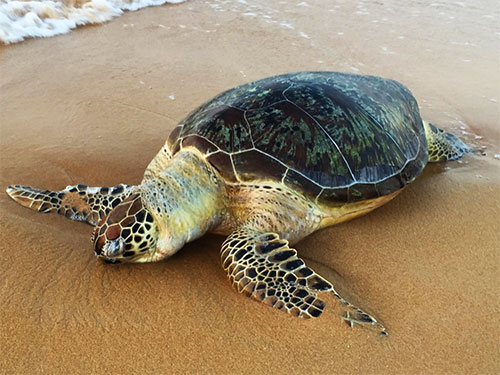 Jokes aside. The turtle above is dead although recently deceased. 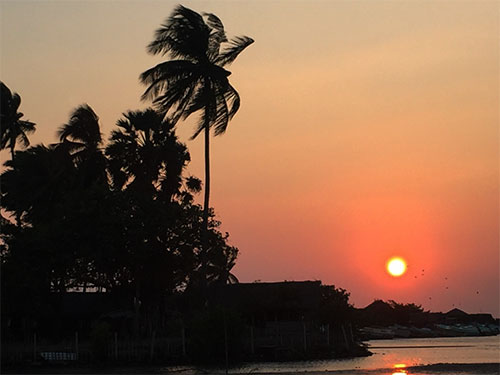 Sunset over the small lagoons that can be found everywhere on the peninsula.

The day after it seems like the dives around the peninsula does not seem as exciting as we had hoped for. In addition, the dive centers are both full and expensive (90 Euros for two dives) so we postpone our last dives to Colombo which is supposed to have some really cool wreck dives.

To some extent our bet on the Kalpitiya peninsula was a bad bet. J liked it better than I did but since I am not that fond of sun tanning I did not have much to do. After two nights we head for Wilpattu National Park instead. That is where we meet Lars-Bertil, who will sleep behind my ear for a full bus ride!

My recommendation: The peninsula where Kalpitiya is seems, above all, to be a paradise for kite surfers. The beaches are just a nice as everywhere else in the Sri Lanka but they are not extraordinary in any way. The peninsula is perfect if you want to get away from the beaten track and just sunbathe and swim.

It is quite expensive in comparison and the supply of restaurants, guest houses etc are very slim. You will not really find places to stop by, have a coffee, relax in a hammock or the likes of it. I find the lack of things to do quite boring, especially since I needed to stay away from the sun for most of our stay here.

The traffic in Sri Lanka