We woke up our first night at a “real” hotel and used the little button on the wall that meant Room Service. It felt really luxurious to get coffee by the bed at a $5 hotell! With some caffeine in our blood we went back out on the roads again to go through the “elephant park” again and we were not disappointed.

Apparently, the elephants stand on the highway by the park because they are used to getting fed by cars passing by (locals as well as tourists). It has come to such extent that they sometimes act as a “road toll” and will not let vehicles pass unless you provide them with a toll fee, for example a water melon. As an insurance we brought a bunch of bananas as a toll fee, if it would be needed. 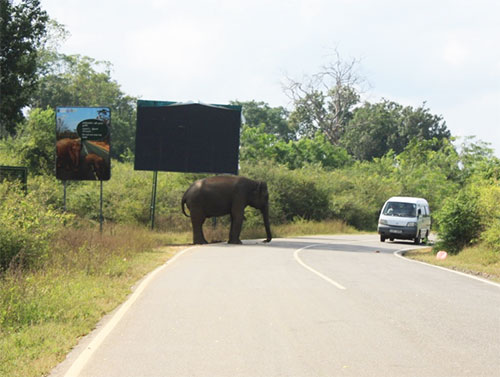 We managed to get by the three elephants without paying a toll (frankly, we do not want to promote this). After that it was just a matter of transportation to get back to Tangalle. After a few hours and several wrong turns later we were quite tired of sitting on that motor bike seat and I could hardly feel my butt any longer. The relief was immense to finally drive up to Tangalle and finally have an afternoon swim!

We, of course, went back to Kamal and his restaurant Pearl Beach to get another version of his fantastic Rice and Curry. After a Piña Colada in the evening we decided to ease up on our travel tempo a bit and stay one extra day in Tangalle, which felt incredibly nice. Most of the second day we spent in the hammocks of Pearl Beach and, at times, in the waves. There is not much to mention about our time in Tangalle this time, which is a good sign of complete relaxation.